Ecuador straddles the equator on South America’s Pacific west coast. With a population of over 17.5 million, 25% live on less than $3.20 a day. Its diverse landscape and distinct cultures span the Amazon jungle, Andean highlands, the Coastal region, and The Galápagos Islands.

The Andes (sierra region) is also home to The Waterbearers organization. As such, Waterbearers is uniquely positioned to work with local communities and have formed partnerships with higher education institutions such as the University of Azuay and the local government, the Prefecture of Azuay, under its former leader Yaku Perez.

“Water is worth more than gold,” says Yaku, whose name in the indigenous Quichua language means “water.”

Since 2015, The Waterbearers have distributed filters and training in four provinces (representing 64 parishes) in the central highlands, impacting over 20,000 people. In 2020, working alongside the Azuay provincial government during COVID restrictions, distributed 100 filter systems and demonstrated their use in 48 rural communities. This project benefits 1,345 families who lack access to safe drinking water.

Donate to this project

Clinica Linda, A Free Clinic for Indigenous Families in the Andres Mountains 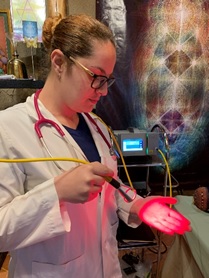 Clinica Linda is an all new free-clinic for Indigenous Families in the Inter-Andean Valley outside of Paute, Ecuador at TOSA Blue Mountain Sanctuary. A high number of valley residents are farmers and report issues with severe & debilitating physical pain from a life-time of very hard, physical labor.

Many are unable to walk or stand up straight, let alone participate in daily living. TOSA Blue Mountain is blessed to be the custodians of a revolutionary, premium laser technology (Epoch Lasers) that heals on a cellular level, causing less chronic inflammation and new tissue generation while healing.

The high-majority of those that receive laser treatment report immediate pain relief and after a series of multiple treatments, may experience a complete reversal of the pain and discomfort!

Living with chronic pain can make one feel helpless, which can lead to excessive use of painkillers and even depression. Treatment with Healing Light is non-addictive, highly effective and safe.